You are here: Home / Places / Heritage Park Zoological Sanctuary – Prescott, Arizona
32 shares
This post may contain affiliate links. This means if you click on one of my affiliate links and make a purchase, I may receive a commission. 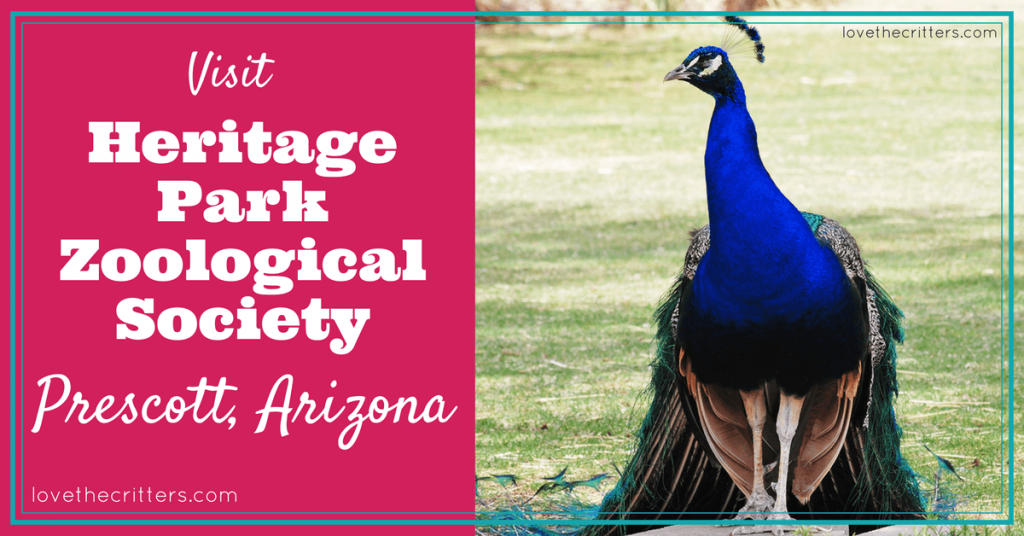 The Heritage Park Zoological Sanctuary in Prescott, Arizona, is a wonderful place to spend a couple of hours. It is situated on 10 acres and is small enough you can easily see the entire zoo. It is still big enough with a good variety of animals you will feel as though you got your money’s worth and time well spent.

Established in 1988, it is a non-profit organization that focuses on wildlife rescue, providing a home for non-releasable wildlife, conservation, and public education.

In addition to seeing the animals, visitors can enjoy the picnic area, a children’s playground, and a gift shop. They also have many events throughout the year such as Breakfast with the Animals, Zoo by Moonlight, and Taste of the Wild.

Here are some highlights and photos I have taken over multiple visits over the past several years.

These guys are gorgeous! They have six of them roaming around. The best time to see them is in the spring when they are showing off their plumage. Indian peafowl are native to South Asia.

They have 2 black bears, Shash and Gus. Both of their mothers had been killed when they were very young, one accidentally by a hunter and the other hit by a car.

Shash is the largest black bear I have ever seen in person. He is HUGE!

You can watch them feed the bears every day.

They have a female bengal tiger named Cassie. She came from a facility in Nebraska that closed down. Bengal tigers are endangered. You can also watch Cassie being fed every day!

The Mexican gray wolf was almost completely extinct due to hunting. The last 5 Mexican gray wolves were caught in Mexico between 1977 and 1980 and were bred with captive Mexican wolves in order to save the species. They have since been reintroduced to the wild but are still endangered.

The Heritage Park Zoo has 2 Mexican gray wolves and are part of the species survival plan.

They have many reptiles including a reptile house with many snakes and lizards. Depending on the time of year and whether they are hibernating, you can see American alligators and several kinds of tortoises. They also have some large iguanas, a green iguana and two rhino iguanas.

Their collection of tarantulas seems to change every time I visit, but they always seem to have at least one native species. They also have hissing cockroaches and scorpions.

There are 2 coyotes at the Heritage Park Zoo, Jake and Loki. Jake was found in an urban area and could not be successfully relocated, and Loki was found abandoned only a few days old.

Here is a video I took of one of the coyotes howling!

In addition to the peacocks roaming the zoo, there are many birds including macaws, emu, owls, hawks, falcons, and eagles. Many of their birds had been injured and are unable to survive in the wild.

The Heritage Park Zoo also has many other animals I have not included here. I will get more photos on future visits and share them here later!

« What pets can be kept in a 10 to 20 gallon aquarium?
Amazing Facts About Octopuses »

Love The Critters is a participant in the Amazon Services LLC Associates Program, an affiliate advertising program designed to provide a means for sites to earn advertising fees by advertising and linking to Amazon.com.
Privacy Policy | Terms of Use
32 shares