You are here: Home / Wildlife / Amazing Facts About Octopuses
328 shares
This post may contain affiliate links. This means if you click on one of my affiliate links and make a purchase, I may receive a commission.

Octopuses are some of the most incredible and interesting creatures on earth. Most people know the basics about them, such as they have 8 arms with suckers, a large head, and they can shoot ink. Keep reading for more facts about octopuses you may not have heard before.

There are around 300 known species of octopus. They belong to the class cephalopoda which also includes squid, nautilus, and cuttlefish.

The oldest octopus fossil found so far was from an animal that lived 296 million years ago, which makes it older than dinosaurs!

The smallest known species is Octopus wolfi, also known as the star-sucker pygmy octopus. It’s length is less than 1 inch (2.5 cm) and weighs less than a gram.

Unfortunately, octopuses do not live very long. Depending on the species, they may live only 6 months up to 5 years, with the larger species tending to live longer. Males die shortly after mating. Females care for their eggs until they hatch and then she dies.

Octopuses are carnivores. Depending on where they live, they may eat other marine animals such as fish, shrimp, clams, crabs, etc.

All octopuses are venomous. The blue-ringed octopus is the only one known to be deadly to humans.

Octopuses have blue blood.  Their blood is blue because it has hemocyanin which is a copper-containing protein that binds oxygen.

They can swim forward and backward, but they actually swim the fastest while going backwards with their arms trailing behind them. They do this through jet propulsion, expelling water through a siphon.

You probably already know that octopuses squirt black ink. They use it as a defense mechanism to distract a predator while they escape. What makes their ink black is a substance called melanin, which is the same pigment that makes people’s skin, hair, and eyes dark.

Octopus do not have any bones. The only hard part of an octopus’s body is its beak. They can squeeze through extremely tight places as long as their beak fits.

If an octopus loses an arm, it can regenerate a new one.

The interior surface of their arms is covered with round suction cups that allow the octopus to anchor itself or manipulate objects. They can also smell and taste with their suction cups.

Each arm has a mind of its own. Each arm is able to touch, taste, and move independently without control from the main brain in the head. If an arm is cut off, it can still continue moving and react to pain for up to an hour.

Octopuses have have excellent eyesight and sense of touch, but they cannot hear and are not able to make sounds.

Octopuses are amazing at camouflage. They can change the color of their skin incredibly fast. In order to change color, they use special pigmented cells called chromatophores which are controlled by nerves and muscles. They also have cells called iridophores and leucophores that change their reflectivity and to scatter light.

In addition to changing color, octopuses are also able to alter their skin texture, providing even better camouflage. They have special muscles that control the shape and projection of skin protrusions which are called papillae, so they can look smooth, bumpy, or even spikey.

Octopuses are considered to be the most intelligent of all invertebrates. They have a huge brain compared to other invertebrates and are able to learn and remember. They are able to navigate mazes and open jars to get food that is inside.

There was an experiment in 2010 that confirmed they were able to recognize individual humans even when dressed in the same clothing. Some studies show octopuses may even have emotions and individual personalities.  They have even been seen to play and use tools.

If you want to read more about their intelligence, I enjoyed these articles: Are octopuses smart? and Deep Intellect. 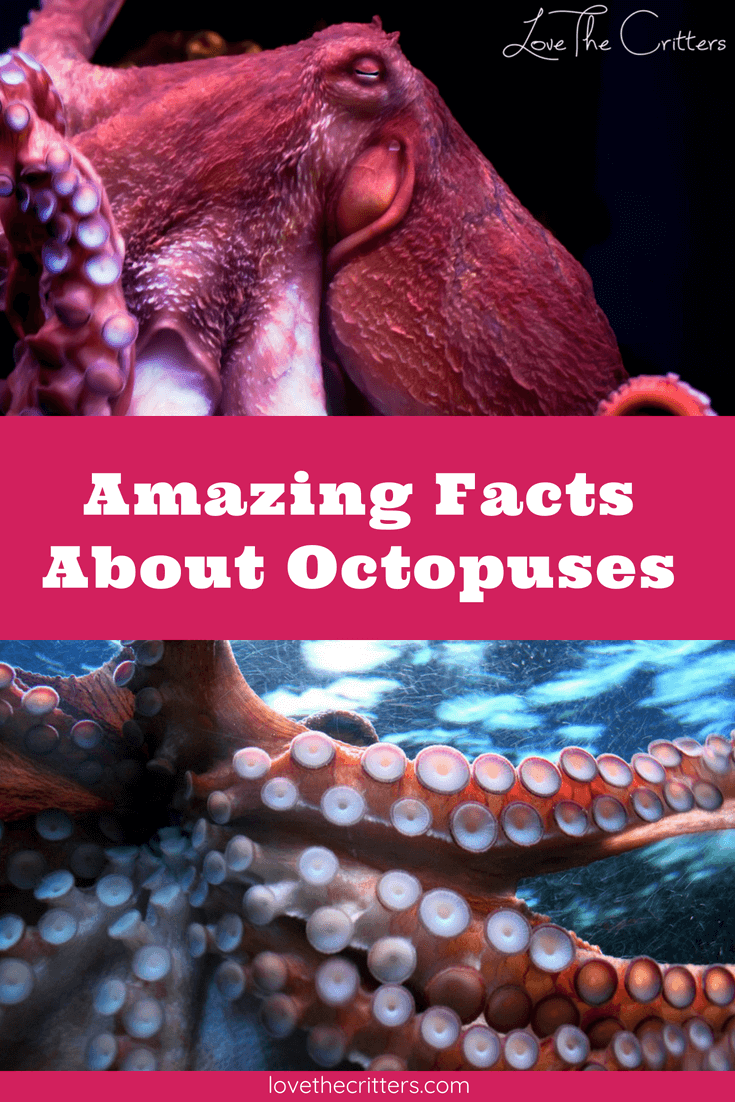 Love The Critters is a participant in the Amazon Services LLC Associates Program, an affiliate advertising program designed to provide a means for sites to earn advertising fees by advertising and linking to Amazon.com.
Privacy Policy | Terms of Use
328 shares