You are here: Home / Wildlife / Facts about moose, the largest deer
377 shares
This post may contain affiliate links. This means if you click on one of my affiliate links and make a purchase, I may receive a commission.

Moose are the largest and heaviest member of the deer family. They are most easily recognized by their long snouts and the large, broad antlers on the males.

Moose are different from most deer species in that they are solitary and are not found in herds.

The earliest known ancestor of the moose is Libralces gallicus, also known as the French moose, which lived about 2 million years ago. The best preserved skeletons have been found in southern France. These animals were twice as massive as the Alaskan moose and had antlers that were 8 feet long (2.5 meters)!

Moose are better adapted to cold than to heat. They have thick skin and a heat-retaining coat which consists of two layers. Moose are unable to sweat, so in hot weather they stay cool by staying around water and wading or swimming in lakes and ponds.

Moose will establish their own home range after they leave their mother. This can be between 2.2 to 57 square miles (3.6 to 92 km2). Males tend to have a larger home range than females. Some moose also migrate seasonally. The size of their range and migration depends on food supply.

Moose have excellent hearing and sense of smell, but they have poor eyesight.

Bull moose grow a new set of antlers each spring. Antlers grow for 3 to 5 months. While growing, they are covered in a velvet furry covering that has blood vessels in it to help with growth.

How fast the antlers grow and their final size is determined by diet and age. The antlers of a mature bull moose average between 3.9 to 4.9 feet (1.2-1.5 m) and the largest getting up to 6 feet.

By the start of mating season in September, the velvet is shed and the moose rubs it off on trees and shrubs.

A bull moose will use his antlers to impress females as well as rival males.

After mating season ends in the fall, they will drop their antlers for the winter.

Interesting Fact:  The flap of skin that hangs below a moose’s chin is called a bell.

Moose are diurnal, which means they are the most active during the day.

Moose can run up to 35 miles an hour for a short distance or trot for a longer period at 20 miles per hour. Despite their large size, they are able to move silently through the forest.

They are excellent swimmers and can swim for several miles.

Moose are herbivores. They eat many types of plants and fruits, including both terrestrial and aquatic vegetation. Moose prefer twigs, stems, bark, leaves, and shoots.

Moose are able to dive underwater and eat plants from the bottom of lakes. They are the only deer that are able to eat underwater. They are able to close their nostrils which prevents them from inhaling water while eating.

Mating season for moose is in the fall between September and October.

Females will give birth to 1 to 2 calves in the spring. Calves are born weighing around 30 pounds. They stay with their mother until the next spring when their mother gives birth again and they are a year old.

Natural predators to a full grown bull moose include Siberian tigers. Wolf packs and brown bears may attack younger moose, females with calves, and elderly moose. American black bears and cougars attack calves and occasionally adults. As high as 50% or more of calves do not survive due to predators.

Other threats to moose include bacterial infections due to injuries sustained from predators and parasites such as liver flukes, brain worms, and winter ticks.

Humans are also a threat to them from hunting and habitat loss.

Moose defend themselves against predators by striking them with both their front and back feet. They can strike so hard that they can break bones and even kill a wolf. 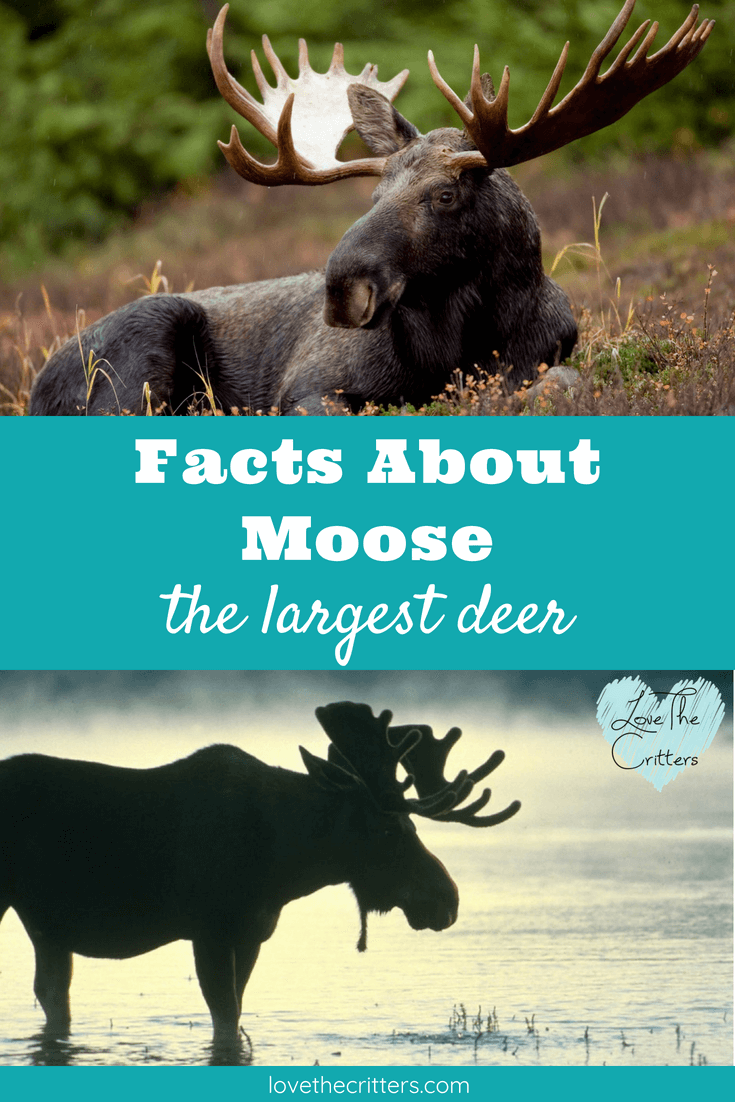 « How to care for pet ferrets and ferret facts
Out of Africa Wildlife Park – Camp Verde, Arizona »

Love The Critters is a participant in the Amazon Services LLC Associates Program, an affiliate advertising program designed to provide a means for sites to earn advertising fees by advertising and linking to Amazon.com.
Privacy Policy | Terms of Use
377 shares